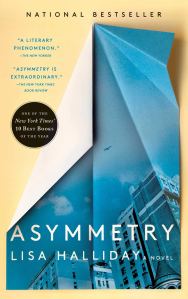 Asymmetry  by Lisa Halliday must surely be the most warmly reviewed novel published in 2018. A main feature of all the publicity is that the novel features a semi-disguised account of the author’s affair with Philip Roth, a literary legend in the USA. In addition, critics have applauded Halliday’s novel for its originality, breaking of boundaries, and its experimental form. For example, Alice Gregory in The New York Times says that “Halliday has written, somehow all at once, a transgressive roman à clef, a novel of ideas and a politically engaged work of metafiction.”

The notion that Asymmetry is transgressive appears to rest on Halliday’s use of discontinuous narrative, consisting of three loosely related novellas tied together to form a “novel”. There is also critical approval of Halliday’s clever manipulation of autobiography, and the role of a novelist in constructing an artificial reality.

The idea that Asymmetry is a complex, revelatory novel has gained enormous traction in literary reviews, following the cue given by the publisher in its blurb on the cover: “Playful and innovative, tender and humane, Asymmetry travels the globe, inhabits multiple perspectives, and transforms: from a vivid and unconventional love story into a novel that challenges the power plays and imbalances of contemporary life – between male and female, young and old, West and Middle East, talent and luck, and the personal and the political.”

However, it is difficult to resist the uneasy feeling that the warm reception from reviewers is due to the fact that Ezra Blazer, the main protagonist, is a thinly disguised portrait of Philip Roth, who had an affair with the author. As Alexandra Alter says  in The Sydney Morning Herald, “Asymmetry has caused a stir because of the unlikely romance at its core. To literary insiders, Ezra Blazer bears a striking resemblance to Philip Roth.” Alter’s reference to “literary insiders” is significant. While Roth is a legend in the United States, certainly to “literary insiders”, the average reader might not know that Blazer is Roth until they are told (by the literary insiders). Nor would they realize that Lisa Halliday once had an affair with Philip Roth.

If Ezra Blazer could not be identified as a “real-life” famous American novelist, would we care as much about his relationship with a young woman working in publishing, in the first part of Asymmetry? Or feel affected as much by the second part about a Muslim man detained at Heathrow – apparently a novella written by the young woman in the first novella? And would we care about the comments of Ezra Blazer in a radio show, in the coda to the novel, about his choice of music for a sojourn on a desert island?

Arguably, what we have in Asymmetry is clever use of the borrowed gravitas of Roth’s fame to stitch together a discontinuous narrative which lacks coherence.

Comparisons with other novels featuring famous writers are useful. Apart from Asymmetry, in recent months I’ve read several novels featuring a famous writer. Of course writing about famous people has obvious attractions. However, there would seem to be more at risk when writers write about other writers. After all, below par fiction about an accomplished writer is asking for trouble. Some writers are so famous that I’m amazed that any writer would have the courage to build a novel around them. Franz Kafka, for instance. However, at least two novels featuring Kafka have been published over the last year or so. The first one I read is Forest Dark, by US author Nicole Krauss, published in 2017. In that novel, both the main protagonists are Jewish, and visit Israel, separately, both in the course of a life crisis. In that context, Kafka, no doubt the most famous Jewish novelist of all, has some relevance in a cultural sense, as well as to certain aspects of the plot. Nonetheless, Kafka remains peripheral to the narrative, with one plot twist involving the legacy of his personal papers, which reduces him to an historical footnote.

Another example is The Lost Pages(2017), an intriguing debut novel by Australian novelistMarija Peričić. It focuses on the relationship between Franz Kafka and his best friend and promoter, Max Brod (also a writer). Again, Kafka is a peripheral figure in this novel, which in fact pays far more attention to Max Brod. And of course, Brod is only famous these days to the extent that he is linked to Kafka. In that sense, the novel stands or falls on the basis of how compelling is its portrait of Brod, a man struggling with his physical infirmities and the effects of living in the shadow of his best friend’s genius. This seems to me to be a far more valid use of a writer’s celebrity than is the case with either Asymmetry or Forest Dark. However, we have to ask whether the portrait of Brod in The Lost Pages would resonate without the presence of Kafka lurking in the wings?

Why not simply make the story about the famous writer and be done with it, rather than relying on a sprinkle of the fairy dust of their fame? This is exactly what J.M. Coetzee did in The Master of Petersburg  (1994). In assuming Dostevesky’s voice and persona in telling the tale of his search for the reasons behind his son’s death in unusual circumstances, Coetzee achieves a dramatic effect that lifts the narrative well beyond a mere fascination with the celebrity of famous writers.

Coetzee makes no attempt at biography. The Master of Petersburg mimics Dostoyevsky’s febrile intensity, and the characters and setting offer a perfect facsimile of his world. Coetzee is, of course, writing in English, and there is no way of knowing how a Russian translation would compare with a Dostoyevsky novel. But the conceit is a fascinating one, in fact well beyond mere mimicy, more like an actor who seems to have the capacity to “be” the character he or she portrays. And that, of course, is a rare thing.